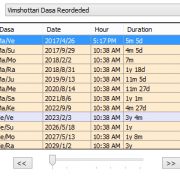 Undoubtedly, Vimshottari Dasa is one of the most essential instruments of Indian astrology and all professional as well as amateur astrologers widely use it in their practice. Astrologers have been using this Dasa system as the most practical technic of timing for several centuries and its basic form is accepted by all astrologers as it is.

It appears that there is no answer to this very fundamental question in any classic as well as modern works. KP astrologers not only use this order but also use another sub division which is on the same order. Still there is no answer about the order itself. There are some explanations about years associated to Dasas according to transits but not for the pattern so I am going to simply show you how this system defined.

Few years back I was questioning every root of astrology and the Nakshatra lordships was one of the mysterious ones. I read in an article that Dasa systems are not originally a Vedic technic but it’s basically Persian! I couldn’t find any similar technic in Persian astrology. This year I could found some rare Persian manuscripts and extracted original Persian Dasa systems but again there is no direct relationship between Indian and Persian directional systems. After rediscovering the ancient Persian system of evaluating planets I noticed about parallel structure and several Persian subdivisions which not only revealed some Persian techniques but also presents some interesting facts about Indian astrology. One of this technics helped me to figure out the original Nakshatra lordships.

The logic behind Nakshatra lordship is not mentioned in any classic work. Many astrologers believe that nakshatras should only interpreted according to their associated deities but some others such as KP and some Nadi astrologers use the lordships. It’s not known that when this order defined for the first time and who did it. It is simply accepted by all astrologers and just followed by others as an ancient terminology. Here is the basic table of Nakshtaras which is known to all vedic astrologers.

When you asked to name the planets in order, you most probably think of weekday order which is the Sun, the Moon, Mars, Mercury, Jupiter, Venus and Saturn. The other famous one is on the order of spheres: Saturn, Jupiter, Mars, the Sun, Venus, Mercury and the Moon. Sometimes this order used in a reverse manner which starts from the Moon to Saturn according to their mean speed. There are some more other orders which might be rarely used but Nakshatra lordship do not follow any of them.

As far as I know, the only astrological system employs this order is ancient Persian system although this order as well as many other parts of Persian astrology was lost and never introduced to contemporary astrologers. This order is pretty simple and logical. Frist place is for the Sun because it is exalted in Aries. Then it’s the Moon which is exalted in Taurus. Then it’s the place of Rahu which is exalted in Gemini. Many astrologers such as Maharishi Parashara consider Taurus as exaltation signs of Rahu while many other as well as Persian astrologers consider it exalted in Gemini. After that Jupiter is exalted in Cancer and then it’s Mercury in Virgo and Saturn in Libra. After that its Ketu and Sagittarius which is against Maharishi Parashara’s point of view and finally Mars and Venus which are exalted in Capricorn and Pisces respectively. Now I explain how this order makes the Nakshatra system clear.

“Beginning from Krittika, the lords of Dasa are the Sun, the Moon, Mars, Rahu, Jupiter, Saturn, Mercury, Ketu and Venus.”

According to this clear definition, Krittika should be the first Nakshatra. Then the lord of Nakshatras are the Sun, The Moon, Mars, Rahu, Jupiter, Saturn, Mercury, Ketu and Venus Respectively.

Even the Dasa phalas (Results of Dasas) of planets are given according to this order. If you check the alphabets associated to 108 Nakshatra padas you will notice that the vowel A is assigned to first pada of Krittika. It might be why modern astrologers couldn’t solve the enigma of Nakshatra lordship.

Yet there is another important point here about using tropical signs in Indian astrology. It seems that old Indian astrologers like Parashara didn’t use Ayanamsa for signs in a way modern astrologers do today. I think that Indian astrologer used to employ tropical signs and sidereal Nakshatras and it seems that using sidereal calculations for both Signs and Nakshatras is a recent approach. By recent I mean at least several hundred years of course! This subject needs a very deep discussion and more research. Just keep in mind that once upon a time vernal equinox was in Krittika which was the first Nakshatra on that time and in pretty makes sense that lord of Krittika is as same as exaltation lord of Aries which is the Sun.

If we reorder Nakshatras in their previous form, nothing will be changed in our calculations. The only change is that the first Nakshatra will be Krittika and its lord will be the Sun. so the order of lords will be the Sun, the Moon, Mars, Rahu, Jupiter, Saturn, Mercury, Ketu and Venus respectively. Nothing changed because it’s all cyclical. The only change is to putting Krittika as the first.

After reordering Nakshatras, the relations will be clearer. This order is more similar to the forgotten Persian order of exaltations. As you can see, by a simple comparison, most planets are the same but still two little difference can be seen. Mars and Saturn are not on the same place. If we simply exclude Mars and Venus, both systems will be same! So we need to ask why this change was made. Is it by mistake or there is a reason behind it?

A new place for Saturn and Mars

It seems that Indian sages made some little changes in the system they gave from Persian. They might had not known about the reason behind the system or might had decided to localize it according to their own concepts. In both cases, they changed the order. The only thing that I can think of is about planetary friendship. There is a very famous planetary friendship or Graha Maitram which divides the planets into two groups of Daivy and Asuri. Daivy planets are the Sun, the Moon, Mars and Jupiter while the Asuras are Saturn, Mercury and Venus. In the first groups, the Sun is the leader and Saturn is the leader of opposite side. It seems that Indians used this system to adjust the order. Therefore, Mars moved after luminaries and Saturn comes before other Asura Planets. By this little change, all Daivy planets are at the first part and Asuri group is the next part.

The structure of Yogini Dasa is more match with the mentioned order of exaltations and despite Vimshottari Dasa, its structure is not changed that much. The only change which is not reasonable is swapping the Moon and the Sun. Some authors explained this swap of luminaries by mentioning that yoginis are the mothers of planets, so moon should be the first in this system but it doesn’t make sense to me.  Despite Parashara, there are some other texts which suggest the Sun as the first planet in Yogini Dasa and here I see a reason to trust the other ideas rather than Maharishi Parasara.

It seems that religious and philosophical viewpoint of Indians made them to adjust the system they gave from Persians and develop their own system. Directional systems made by Persians first and Indians applied that system by associating the modified version of order of exaltation to Nakshatras and making a new system which is known as Nakshatra Dasa. Persian system was not as flexible as Indian Dasa system we know today but still it was based on a very clear basis which was planetary exaltations.

Now there is a question. Is it good to use Vimshottari Dasa according to original order of exaltations? As a researcher who works with both systems and do not prefer a system to another, I believe that we need to test everything. I always appreciate traditional technics and I am also open to new Ideas and theories as well. Again I don’t accept any theory which is not fully tested. The current Vimshottari Dasa had been tested for several centuries and the new order which is represented here for the first time also needs to be tested. For astrologers who are loyal to classical systems, it might be a resistance against any possible change. For KP astrologers it might be harder because not only the Dasas will change, but also all sub divisions will be changed as well. So it needs to be very open to this new system to be able to judge about it. It needs years of research and patient researchers to test its validity.

To make it easier, I have the calculations in “Bindu astrology software”.

If you accept the Idea, you are invited to test it and share your findings.

Want to join the discussion?
Feel free to contribute!